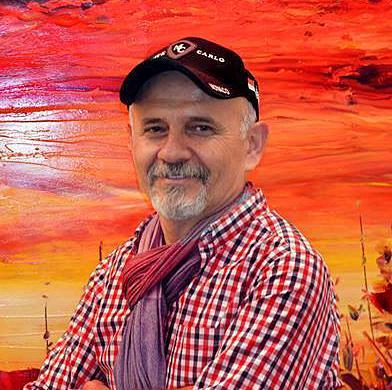 Born in 1958 in the city of Konya, Turkey. Hikmet pursued his elementary and high-school education in the city of Denizli, Turkey and in 1982 he graduated from the School of Fine Arts at "Gazi" University in Ankara. Hikmet Chetinkaya is actively involved in the artistic world of Turkey, having had more than 50 solo exhibitions and taken part in more than 400 collaborative ones.

Apart from exhibitions, Hikmet also stages performances and ateliers for his fans. He has been awarded many decorations from the fine arts community in Turkey and abroad. He is the prize-winner for a series of competitions, which have given him the opportunity to create monumental artworks, placed in different social spaces around Turkey, such as ministries, airports, and hotels. He spends his time between Ankara, Turkey, and Toronto, Canada.

Hikmet Chetinkaya's paintings are easy to spot, as the object of most of them is a single flower - the poppy. In fact, his entire artistic career and life philosophy revolve around the poppy. While some of his works do bear the characteristic symbolism, typical for of landscape paintings, others have an entirely decorative feel. But all are equally impactful and expressive.