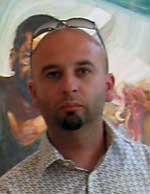 Born on the 8th of October 1972 in Plovdiv, Ivan graduated from the High School of Acting Crafts in Plovdiv, then continuing on to specialize in Scenography at the National Academy of Fine Arts in Sofia. In 1997, he decided to further his education in Germany at the Academy of Arts in Mainz and Frankfurt am Main, where he was tutored by Herman Nitsch and Christa Neher. He splits his time between Bulgaria and Germany and has been the subject of many successful solo exhibitions in both countries. He is the winner of numerous competitions, but can also claim other achievements, such as his works being part of the collection of the European Parliament, his works being purchased by the Sofia City Gallery, his paintings being bought by ........., and his paintings being part of many private collections internationally.

Ivan works are figural paintings, inspired by his German tutoring. His paintings stand out with their unmistakeable artistic language, which coexists with a professional and skillful representation of shapes.His paintings serve as a provocation in their own, uniquely-constructed way.